Today, I’m participating in the blog tour celebrating the release of The Blood Race by K. A. Emmons! And, to spread the news, I’m giving you guys a special excerpt of one of my favorite scenes in the novel.

He’s spent his life running from who he is. She’s been trying to escape her past for 100 years…

Born with unexplainable abilities he struggles to control, college student Ion tries desperately to integrate into his new school and finally put his dark past behind him. But after making a serious enemy, which leads to an accidental rendezvous with the mysterious old man next door— and his hauntingly beautiful but troubled young protégée Hawk, Ion realizes his life will never be normal again.

Late one evening, Hawk drags him by the hand into a closet-turned-rabbit-hole to an extra dimension, and Ion finds himself stumbling involuntarily into a secret society of training for “anomalies,” teenagers with a special set of abilities. Just like him.

As they train to become Protectors of future Earth, battling each other as well as their own demons, both Ion and Hawk begin to realize that they are far more alike than they realized. Unsettlingly so.

When the Dimension is shaken by an unthinkable betrayal, will an ancient prophecy bring Hawk and Ion together—or will a deadly threat hidden in plain sight cost them both their powers… and their lives?

“Does he teach at a school close by or something?” I asked. “He wasn’t exactly clear.”

“Clarity isn’t his forte,” she replied, setting a plate down in front of me. “I hope you like eggs.”

I didn’t particularly, but I wasn’t about to be that guy.

She sat down across from me, that same scrutinizing look in her greenish brown eyes. I wasn’t sure which was more distracting—that or the music.

“Am I ever going to know your name?” I asked after what felt like an awkward amount of time had passed.

“You have a thing about names, don’t you?”

She pondered this, resting her elbows on the table. “I’ll give you a name, then.”

I could tell by the way she said it that whatever followed would be anything but her real name.

“Hawk is your name?” I started poking at the eggs with my fork. “Like the bird?”

There was something incredibly irritating about her. I couldn’t put my finger on what it was. The music was still throwing me off.

“You’re making this up,” I told her finally. “I can tell by how you’re acting.”

For the first time her expression seemed vaguely amused. “You don’t know me, so you have no basis for what my norm is,” she said. “There’s no way for you to know whether I’m lying or telling you the truth.”

“It doesn’t matter.” I took a bite of food. “I only cared because flirting is easier when you know someone’s name.”

“Is it really.” She didn’t say it like a question, and I could tell it wasn’t one.

“Could you possibly turn that down?” I asked, glancing in the direction of the radio.

She raised an eyebrow. “Why, so you can flirt with me?”

“No, it’s just a little too loud,” I said. “But I could make the flirting thing happen too.”

“Not particularly,” I said, swallowing another bite. “It’s a little annoying.”

“Why do you think it’s annoying?”

“I don’t know,” I said, my voice trailing off, and she put up a hand for me to stop. There was a thin circular tattoo wrapping her ring finger.

She motioned with her hand again. “Listen. Listen to it.”

For a moment I did, without even asking why. I set the fork down on the plate and pushed it away quietly. Her eyes met mine from across the table.

I thought about her strange question.

“Nothing particularly,” I said. “I just don’t like them.”

“Does it sound louder to you now than it did before?” Hawk asked, still not breaking eye contact. “Did you hear the volume change at all?”

I opened my mouth to reply but closed it again before any words could come out, listening.

The volume had changed. It was louder now.

“It sounds the same,” I lied, trying to ignore the intensity of her gaze.

“Are you sure about that?”

I cut her off before she could say anything else. I had no idea how she had found out about me, but I knew where she was taking this.

“Just stop, okay?” My voice rose as my hands went unconsciously up over my ears. “Don’t make me focus on it—I don’t want to think about it.”

I felt my heartbeat starting to pick up. When my hands fell away, the room was completely silent.

“That was strange, wasn’t it?” she asked slowly. “It suddenly stopped.”

“You turned it off,” I corrected.

“Why?” she asked, folding her hands on the table in front of her. “Are you scared?”

“Of course not.” I tried to level out my voice. “What are you talking about?”

She looked at me hard for a moment before saying anything. “I think you know.”

I shook my head, but she persisted. 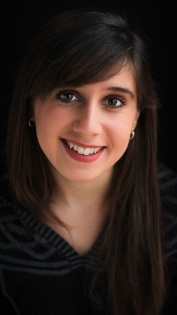 When she’s not hermiting away in her colorfully-painted home office writing her next science fiction, passionate story-teller and adventurer Kate Emmons is probably on the road for a surf or hiking trip, listening to vinyls, or going for a power run.

Emmons lives in the often-snowy hills of rugged Vermont with her husband and dog named Rocket.

Totally Graced kicked off the blog tour with this post. Abbie told us five reasons to read The Blood Race in this post. And here’s an interview with the author along with a mini-review.  And also a CHARACTER interview (lots o’ fun) here.

And that’s all for today, kids!

Have you heard of The Blood Race? What do you think of it from what you’ve heard? (OR, for those of you who have read it, what secrets can you share???????)

Hello! I'm Rosalie--a new creation in Christ, a writer, a somewhat crazed blogger, and an ever-hungry reader. You were designed to know God. Let's know him together.