When Your Copy of Romanov Arrives [the definitive guide]

In the event that anyone happened to forget, Romanov by Nadine Brandes releases May 7. That is a week from today.

For those of you who don’t know (where have you been and what have you been doing with your life?), Romanov is a historical fantasy retelling of Anastasia.

I had the privilege of reading it last summer, and I wasn’t sure how it could ever top Fawkes or The Out of Time series (Nadine’s previous books which I ADORE to high heaven). But then it did.

Thus, in celebration and warning, I’ve compiled this guide for when Romanov appears on your front step (because you’ve pre-ordered it, right?). You’re welcome in advance. (Also, this started out as an eleven part series, but I’ve taken the liberty of condensing it down to a single post.) 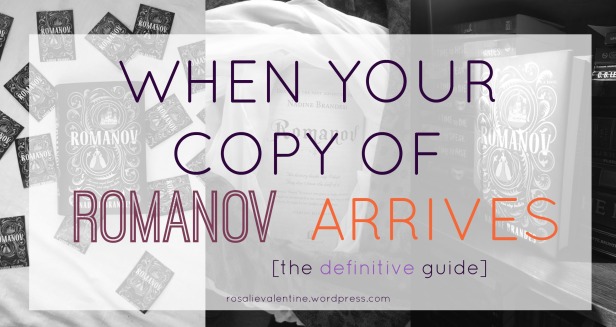 If you’re like me, your heart is tuned to the sound of the mail truck. And the FedEx truck. And the UPS truck. Thus, when you hear (aka: sense with your bookwormish, snail-mail-obsessed sixth sense) the delivery truck approaching, you know the time has come.

You fling open the door, race and/or dance down the front steps, and scoop the box out of the driver’s hands before he’s even made it out of his truck.

Or maybe you’re slow and/or an introvert and find that Amazon fulfillment box lying alluringly just outside your front door.  Your hands go shaky, your mouth goes dry, and you gather up the box like a dragon with treasure, retreating back into the safety of your house.

Step One: Put on the proper soundtrack.

You know in the movies when the hero finds the priceless artifact? He opens the box, and light floods out while a orchestra adds epic notes to the moment.

Friends, this is that moment in your life.

Or also that moment when Thor’s restarting a dying star. It’s also like that moment.

You’re only going to get it once. So make it count.

Select the proper song (I’ve taken the liberty of compiling a playlist for such a moment [no, I’m not obsessed]), pop on the headphones or bluetooth connect with the speaker, and turn the volume to the max.

I don’t know what you’ve been up to on The Day When Romanov Arrives, but you don’t want to get any grubby fingerprints on that gold-foil cover .

So go scrub the chocolate or pizza residue or ranch dressing off your fingers.

You can video this to post on Instagram and/or Facebook if you like, but I advise against it because cutting open a box one-handed is bound to end badly. You could end up stabbing yourself, or worse, Romanov.

So don’t try to be a hero. Video yourself with Romanov after you’ve already opened the box.

Step Four: Pose for pics and videos and publish on social media.

On the day Nadine revealed the cover for Romanov way back in 2018, I rambled and raved for a full nine Instagram stories. And that was just discussing the cover, so really, the sky’s the limit for this initial photo shoot/five part Youtube series about Romanov‘s arrival and how excited you are about it and how much you want to read it.

Also, did Romanov even arrive if you didn’t document it on social media (that was not at all a burn to the #bookstagram world [or was it? {I need to stop, especially since I will be documenting the socks off the arrival of my various copies of Romanov}])?

Step Five: Stop Reading Whatever It Is You’re Already Reading.

Romanov arrives on your doorstep (because you’ve pre-ordered it, right?), and you think to yourself, “Oh, wonderful! I’ll start it as soon as I’m finished with Such-and Such.”

That is not at all what you should say to yourself when Romanov arrives in all its gold-foil glory.

Stop whatever it is you’re #currentlyreading. It’s lame in comparison to Romanov (I realize that is a VERY bold statement…. and I stand by it 139%).

Step Six: Abscond from all responsibility for the next 72 hours.

“Why 72 hours?” you may ask yourself. You clearly have never read a Nadine Brandes book.

Granted, it’ll probably only take six or so hours to read Romanov (probably less because it is in fact the smallest book Nadine has written to date). But you will be so wrecked after that you will need quite some time to recover and crawl out from under the mountain of used tissues.

I am not a story crier. I don’t cry over books or movies hardly ever (I didn’t cry during Avenger’s: Endgame, if that gives you any perspective).

However, there are two novelists who have a history of sending me to tears: C.S. Lewis and Nadine Brandes.

So just know that this book is going to take you everywhere emotionally before it finally spits you out at the end, and it takes time to recover from such trauma.

A few reactions I had along the way:

^ me trying to make everything okay with fire ^

(this many uses of this Thor gif is not an accident, FYI)

Reading supplies you will need for Romanov include but are not limited to:

If this step needs explanation or elaboration,  I don’t know what you’re doing here or with your life in general.

Bonus! Start measuring time in relation to when you read Romanov.

There is only before and after. B.R. = Before Romanov. A.R. = After Romanov.

And that’s it, kids.

p.s. – there’s a fun Instagram photo challenge that starts tomorrow, in case you want to jump in! Search for this: #romanovninjas

p.p.s. – I’ve been waiting to be able to squeal with the world about Romanov for mooooooonths, and I’m (clearly) very excited that it’s finally going to be out and about. Nadine has worked so hard on it and executed it so. freaking. well. Excuse me while I go reread it. Again.

p.p.p.s. – don’t forget the Romanov arrival playlist (if you thought I was joking about making a playlist for the arrival, you were clearly wrong; I don’t joke about Nadine Brandes books).