Life, Uh, This is Random

How To Do Something You’ve Never Done Before

Have you ever felt the urge to try something that you’ve never done before?

Maybe you’ve never skateboarded a meter in your life, but you want to try it so bad. Or maybe you’ve never held a guitar or any instrument before, never written a line of poetry either, but an itch starts to grow, an itch to write songs because there are things you’ve seen God do that you want to proclaim. Or maybe coding is starting to sound really appealing, but you don’t have a background in HTML or even computer science. Or maybe you want to garden and grow stuff but you don’t know the first thing about green things.

Does it feel hard? Does it feel like you’re too old to start something like that, like if you wanted to get into storytelling, you should have done it when you were seven, and since you’re thirty-seven or seventy-seven, you’ve missed the window of opportunity?

Does it feel like you’re foolish for wanting to break out of your current skill set? Are you worried that people would wrinkle their noses at you and ask, “Why do you want to do that? You’ve never done anything like that before.”

This, my friend, is for you. 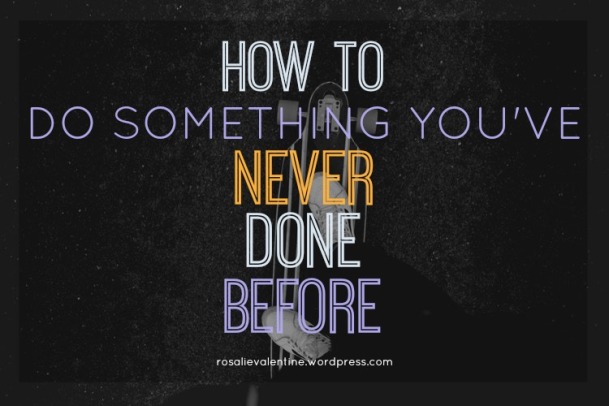 So how do you do something that you’ve never done before?

How do you write songs when you’ve never played with poetry a day in your life?

How do you start writing stories when your creativity has looked vastly different all your life?

How do you start painting when you know nothing about color theory or what the different brushes are for?

How do you start a daily comic when your drawing skills haven’t been cultivated since kindergarten?

How do you do anything you’ve never done before?

So start by actually starting. Do it right now or put it on the calendar for some time in the next week that you will start and do whatever it is for at least twenty minutes. Even if you don’t know where to start, you can still start (trust me, I know).

When you’re able to, read blog posts about it, watch YouTube tutorials about it, talk to people you know have experience in it, maybe take a class, and keep starting.

In the beginning, put it in your to-do list one to three times a week for twenty minute increments as a starting point.

That consistency, that repeated stomping fear in the throat, and simply doing it strengthens your muscles (these are metaphorical muscles, unless the thing you’re starting is some sort of workout insanity; then it will actually strengthen your literal muscles).

One day, this thing that you’re starting today may be a big deal, something hugely integral in your life. But for now, for today, it’s a seed, a spark, an inkling. Let it be a little thing. Don’t overthink it.

Don’t expect too much of yourself.

This sounds bad, but it isn’t. Have realistic expectations. Don’t put the expectation on yourself that you have to be great at it right out of the gate.

I am a huge believer in sharing our gifts. But I also think there’s special beauty and freedom, especially in the beginning of something, for it to be private, shared with God only or maybe a select few.

If you want to share it, share it! But if this little adventure only ever stays between you and God, that’s okay too. It doesn’t have to tangibly affect something or someone; there are many seemingly intangible and unquantifiable “results” that it brings out in you that are more than enough to make it worthwhile.

Also, privacy, especially in the beginning, frees you up to have a lot more fun without other people’s expectations (along with your own) breathing down your neck.

Seriously. Have. some. fun.

Have some fun! Unharness yourself from expectation and enjoy creating or skateboarding or doing whatever it is you’re doing.

Practice and persevere before giving up.

Don’t do something once and decide you’re awful at it. Practice. Keep starting for six months before you give up.

By the end of those six months, if you hate it or even are just meh, feel free to throw in the towel. Don’t ever think that just because you start something you have to do it for the rest of your life. Maybe you will. Maybe you won’t.

Honestly, do this the entire time, but I put it near the end because I don’t want you to get the impression that seeking God for this is going to involve praying and fasting and a moment of clarity and weeping when you think you’ve got the green light from him. I put it at the end because I don’t want you to overthink this (think about it, but don’t overthink about it [have fun finding that balance {also, notice how overthinking is a theme}]).

Then, submit it to him. Submit your desires to God.

Again, at this point, this new thing isn’t a big deal, so don’t overthink it. Just start and see what God does.

Just because you started and stopped something now doesn’t mean you’ll never start it again.

If it “flops” now (aka: you’re not loving it, and it becomes clear that this isn’t the time for this adventure), just know that you don’t have to feel foolish or sheepish if six months or six years or six decades down the road you want to try again.

Honestly, when it’s the right time, the right season of life, when this new thing will accomplish the most good (remember, good doesn’t have to be tangible or concrete), then God will make sure you don’t drop it. Seriously, he won’t let you drop it until it’s the best for you and most glorifying for him for you to do so. Or maybe it’ll be best and most glorifying for you to never drop it. *shrug* I guess you’ll just have to find out.

There you have it.

Now you know how to do something you’ve never done before. While writing this post, I had mostly artsy/creative things in my head, but I think this advice goes for most things—running, mountain climbing, carpentry, steel fabrication, surfing, scrapbooking, etc.

What is something new you’ve wanted to try for a while but haven’t? Why not?

p.s. – Olive Tree (you know who you are), this post is for you, precious one. Go write that music.

p.p.s. – I feel like I said “honestly” and “just” way too much in this post, but I don’t even care because this post was definitely a we’re-sitting-across-from-each-other-at-a-coffee-shop-and-I’m-going-to-encourage-you-to-try-the-thing type of post (aka: remarkably informal, lacking only gifs).