Uh, This is Random

What makes you want to speak out?

Today I have the honor of participating in #Called2Speak Blog Hop which is promoting the dystopian novel, A Time to Speak by the fabulous Nadine Brandes (the awesome book two in the Out of Time series which released October 16 so you can go buy it now). On the #Called2Speak hop, we’re supposed to speak out about something we’re passionate about. 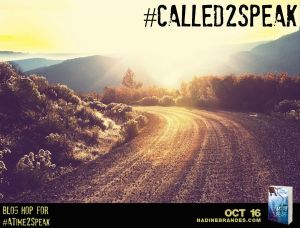 I thought about a bunch of different topics I could write about, but nothing knocked me off my feet. I’m passionate about a variety of things, but none of them… fit. I wasn’t called to speak about any of them.

Who are the Lost?

The Lost are those without Christ.

I’m called to speak for the Lost because I’m not the only one lacking a passion for them. In fact, I’d have to say that this dispassion is widespread and worsening day by day.

Honestly, I don’t really care about the Lost. Not truly. If I loved the Lost, I would share my Hope with them; I would share Christ with them. But I don’t. I act kind and convince myself that showing them Christ is more important, more effective, than telling them Who the Truth is. If I’m nice and smile, they’ll figure it out. No need for me to bring Him up and make things awkward. *shudder* We wouldn’t want that. No, no. I’ll stick to my sweetness and “glow,” and if they ask about Him – and I’m secretly hoping they won’t – I’ll figure something out. Yeah, this is a great plan. Osmosis all the way.

After twelve – almost thirteen – years of these genius tactics, I’ve lead a grand total of zero people to Christ. What, no applause?

The question is, am I going to throw away the next thirteen years “reaching” the Lost this way?

Now, some may think, “Come on. It’s not that big of a deal. If God wants them to get saved, they will eventually.”

Um, no. No matter how I slice it, according to Scripture, sharing the Gospel is a nonnegotiable.

In Matthew 28:19-20, Jesus told the disciples (and us), “Go therefore and make disciples of all nations, baptizing them in the name of the Father and of the Son and of the Holy Spirit, teaching them to observe all I have commanded you. And behold, I am with you always, to the end of the age.”

Step one in disciple-making: share the Gospel. But I’m not. I’m not obeying this command, which begs the question, how much do I love Christ? He said that if I love Him, I’ll obey His commands (John 14:15).

And then there’s Acts 1:8 which says: “But you will receive power when the Holy Spirit comes upon you, and you will be My witnesses in Jerusalem and in all Judea and Samaria and to the end of the earth.”

To witness is “to bear witness to; testify to; give or afford evidence of” according to the dictionary. If I’m God’s witness, I should be declaring His Gospel. But I’m not.

There’s something desperately wrong with my heart. I can rattle off a list of excuses. Just watch and see.

I’m not elegant when I talk.

But ultimately, I don’t want to.

And that right there is so many different shades of weak and wrong.

God says, “For it is not you who speak, but the Spirit of your Father speaking through you.” – Matthew 10:20. That axes my whiny “I’m not elegant” excuse.

God says, “But in your hearts honor Christ the Lord as holy, always being prepared to make a defense to anyone who asks you for a reason for the hope that is in you; yet do it with gentleness and respect.” – 1 Peter 3:15. This command throws my lazy “I haven’t studied” right out the window.

God says, “For God gave us a spirit not of fear but of power and love and self-control.” – 2 Timothy 1:7. That demolished my whimpering “I’m not brave.” Because of Christ, I don’t have to be, shouldn’t be, afraid.

So, where is my love for the Lost? How do I get a passion for them?

If I truly love my Lord, He will give me wild love for the Lost. There’s hope for me yet. He can overcome my weakness, and He can strip away the selfishness in my soul if I want Him to, if I ask Him to, if I let Him.

But, friends, we’ve got to change.

This is not how it’s supposed to be.

Tell me honestly. Do you love the Lost?

What happens when you live longer than you wanted to?

Parvin Blackwater wanted to die, but now she’s being called to be a leader. The only problem is, no one wants to follow.

The Council uses Jude’s Clock-matching invention to force “new-and-improved” Clocks on the public. Those who can’t afford one are packed into boxcars like cattle and used for the Council’s purposes.

Parvin and Hawke find themselves on a cargo ship of Radicals headed out to sea. What will the Council do to them? And why are people suddenly dying before their Clocks have zeroed-out?

Book Two in the “Out of Time” series.

Read about the first book, A Time to Die, here.

To learn more about the author, Nadine, you can check out the interview I had with her last week and enter for a chance to win paperback copies of A Time to Die and Radical by David Platt, or you can visit her website.

ALSO, what makes you want to speak out?  If you want to participate in the #Called2Speak Blog Hop, just write up a post about whatever you are passionate about, and tag it with #Called2Speak!

Okay, I’m not going to lie.  The awesomeness of this giveaway is severely stunted because my blog won’t show the Rafflecopter widget (blast you, blog vs rafflecopter feud!).  If you click on the link, you will discover an opportunity to win signed (SIGNED!!!!) copies of BOTH A Time to Die and A Time to Speak.  Guys, do it.  These books are twelve different kinds of incredible.

Now, to here is a list of all the other bloggers who have participated in the #Called2Speak Blog Hop so far.  Go ahead and check out what they’re passionate about by following the links below. :)

5 thoughts on “#Called2Speak for the Lost”